The Midweek Edition now stands complete at ten.   There was just one match needed for Thursday to complete the set.

Tuesday and Wednesday’s matches and results now follow further down.

Please consider following Noob on Twitter @SoccerNoobUSA.com.  Inquire for details on how to possibly join footyball discussions with cool cats on Bros Talking Soccer’s new Slack.   And click an ad , if you are so inclined.  Some of the stuff is even soccer-related!

Back again tomorrow for Globetrotting Friday!

The Final! And this match is a one-off in Mendoza – a neutral location. Noob is continually surprised that outside Europe in particular that such otherwise weak-seeming teams advance to title matches. Rosario are in 14th of 28 Primera league teams and Gimnasia in 21st. The winner gets much more than a few pesos and a trophy. There’s a qualification to the next Copa Libertadores up for grabs!

Trying to get excited for this one, but it may be tough to watch. Rosario doesn’t score much, and they look like an offensive juggernaut compared to Gimnasia. Catch this one at 7:10 PM Eastern on TyC Sports International if you dare. And have a deep enough satellite TV package.

So long from Mendoza!

At least you can stay in a cool vineyard “hotel” when visiting.

This this Round will also feature two-legged ties, same as the Quarters did. Regular season #1 Cruz Azul gets the honor of hosting the second leg of the home-and-away series, which means they open in Monterrey today.

Cruz Azul haven’t lost since October 20. They’d won five straight matches until finishing off their quarterfinal draw with a 1-1 draw last time out. Plenty of teams score as much or more than C.A., but none defend like them (just 13 goals given up in the 17-match regular season).

Monterrey haven’t proven to be quite as good on either side of the ball. But as one would imagine, they’re not that far off C.A.’s pace, given that they made the playoffs. They’ve not lost in five matches. But they’ve not beaten Cruz Azul in nine consecutive tries.

Arsenal just had a big, God-ordained win in the North London derby. After doing the Lord’s work in defeating named-for-an-historical-traitor (Harry Percy) Tottenham Sir Topham Hatt Hotspur, can they get pumped up again for Man Utd.?

Man Utd have had a dismal year compared to expectations, the usual-title contenders wallowing in 8th place right now. They haven’t won a league match in a month. None of this has been a fluke, either, as they’re struggling on both sides of the ball. For this team to rise again, the great goalkeeper David de Gea is going to need to lead the way. Defense has been even weaker than offense on the season.

Arsenal are in 4th, which is the number of clubs EPL will qualify for the next Champions League. One would point out their offense as the best around if it weren’t for league #1 Man City blowing everyone out of the water in that department. Defense has been spotty for them, too, at least compared to other table-top clubs. German international Bernd Lemo has decidedly been the weak link. Looking for a shootout today.   (3:00 PM Eastern, NBCSN) 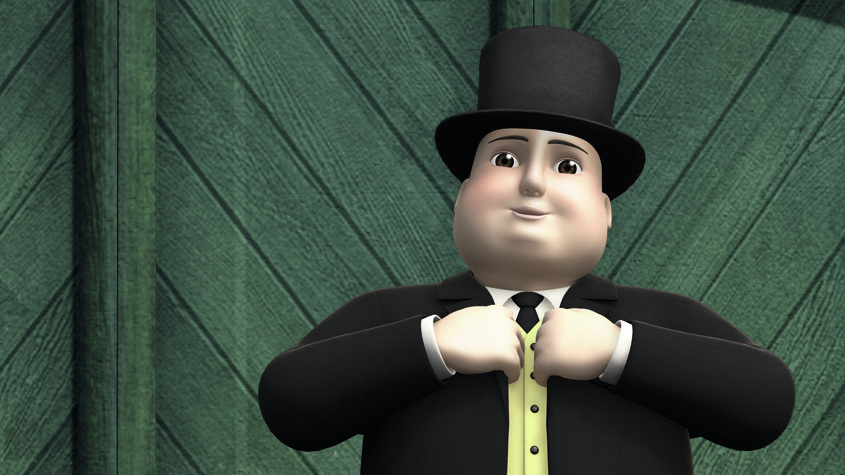 Sir Topham Hatt cannot be cross so soon after a Hotspur loss.

The Final! And crap on a cracker, Noob would’nt have been passing on covering this event had I not had bad info stuck in my head.

This tournament is the equivalent of Europa League, a tournament below the level of Champions League – or, in South America – Copa Libertadores. Noob did not think the winner of Sudamericana automatically qualified for the following years Libertadores, but they do. And that’s some high stakes.

Columbia’s Junior started in the this year’s Libertadores. After finishing 3rd place in their pod in the Group Stage there, they were dropped into this event. They’ve been very strong in their domestic league statistically, yet are just in 6th place right now. Trouble closing out the close matches, anyone?

Atletico Paranaense only qualified for this event, were not dropped down from following a Libertadores round. They just finished the Brazilian season one spot (7th) out of qualifying for the next Libertadores already.

Based on general knowledge of the pecking order of domestic leagues in South America and Elo ratings from footballdatabase.com, it seems fair to say Junior are an even match at best at home today.

This is the second leg of the Serie Final, which pits the playoff champions from the Apertura and Clausura stages of the season against one another. The first match was played at Lara and ended in a 1-1 draw.

If one is interested in a couple extra details, scroll down to the Leg One match preview from 12/2. Suffice it to say here and now that Zamora are the hotter team the second half of the year and most definitely favored today at home.

Winners get to party at KirovBar, Barinas (home of Zamora FC) for disco and with this guy….thing!

The Final! First leg, anyway. Second one will be at Daegu. In Europe, FA Cup winners typically just qualify for the secondary Europa League tournament. Here, the winner not only qualifies for the next AFC Champions League, they’ll enter at the Group Stage (the latest any team enters).

Ulsan finished the K League 1 in third place. That’s just high enough to net them an AFC CL berth, but not as late as the Group Stage. They have to play their way into that as things stand now, via a “playoff round”.

Daegu finished just 7th, didn’t qualify for squat. They’re not nearly as good on either side of the ball as Ulsan, but particularly trail them in goal-scoring.

That said, Daegu haven’t lost in any of their last seven matches across all competitions. They enter vastly hotter than Ulsan. Noob thinks Daegu are easily an even match for Ulsan, maybe even should be favored, given all the momentum they have.

Reminder: India has two top-flite leagues. The other is the I-League. ISL is the one that does not have promotion/relegation. It was created under more of an MLS-like franchise model to promote soccer in the country. They do not qualify teams into international competition like AFC Champions League.

But that doesn’t mean this #B-#1 matchup is any less shiny and alluring! Top four will make the league playoffs. Bengalaru are still undefeated eight matches into the season. They have a game in hand on Northeast, on top of leading them by four points in the table. These teams are the cream of the crop defensively, so look for a low-scoring affair today.   (9:00 AM, Asianet Movies)

Lyon may be the #1 women’s team in Europe, but it’s Germany’s top league that ranks most highly. And no German team is mightier than Wolfsburg – 10-0-0 so far.

Top two will qualify for the next women’s UEFA Champions League. That second slot looks likely to either go to Potsdam or Bayern Munich. No one’ going to get Wolfsburg though. After all, they’ve outscored opponents 46-2 so far. Good golly.

Time for the second leg of the Apertura (first half-season) Semfinals! All four teams are in action today. This matchup intrigues Noob a little more because UANL are undefeated. Guadalajara got a 1-1 draw at their own place, no small feat.

Matching up with the league’s best on their own turf likely to be a whole other matter. UANL scored over three goals per match during the regular season, 2/3 again as many as Guadalajara, and while playing about the same caliber of defense.

Paris Saint-Germain are still undefeated, miles ahead of the pack. So the race is on for just two more Champions League berths. Lille have fallen to 4th, not having one in any of their last five outings. They’ve been outscored 8-3 over that time. Montpelier are #B in the table. 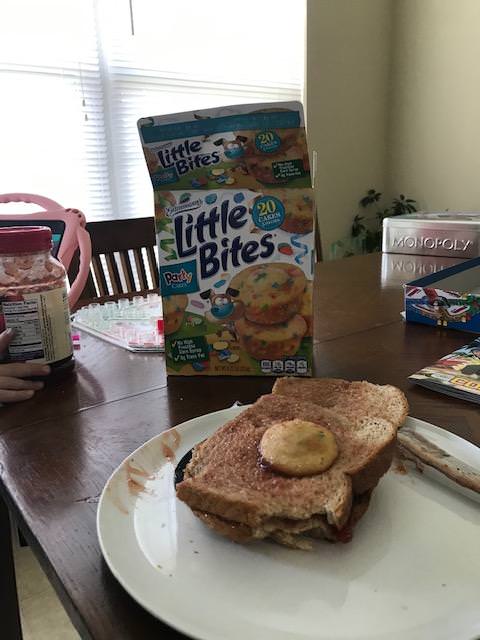 Last installment of NOOB SANDWICH REVIEWOOB, Noob took Subway to task over there new steak sandwich on sunflower bread, a catastrophe if ever there was one.

Today’s featured sammich is much close to home for Noob.  My six year-old daughter – PersonNoob -created this one recently.

single stack.   Each is liberally covered with strawberry jelly.  Here pictured, I’ve removed the top layer to show what she has smashed inside — a Little Bites “birthday cake”-flavored mini-muffin.

We know from “Fizzy’s Lunch Lab” television program that “wheat is sweet”.  But four pieces?   I applaud PersonNoob’s creativity, but one only needs more than two if you’re layering the sammich in different ways between slices.  I blame myself as a parent.

The mini-muffins are fine as prepackaged fare goes.  Certainly eaten my share of ones PN hasn’t finished on our way to her school.

To my surprise, the sweet jam and the “birthday” aspect of the muffin didn’t make this sickeningly sweet, at least not at the first bite.    Yes, I tried it, though only ventured that one bite.  As you might imagine, the texture was just straight up waaaay too much bread.

So does Noob dare really rate a sandwich his own sweet daughter created?   You betcha.   And while this is the highest rating I’ve yet given a sandwich, the finished product still didn’t do all that well.

On the Noob Sammich Review sammich rating scale of one to five Sammiches, I rate the “Extra-Tall Wheat Jelly and Birthday Cake Mini-Muffin Sandwich” at just 1.5 Sammiches.