Welcome to yet another thoughtful and rousing edition of D-Two-sday interviews!   Each Tuesday, Noob chats at a figure from the enviable world of North American Division Two soccer.

Noob’s voice barely recovered from last Twos-day.  All the “WOOOOO-ing” with the prez of a USL Oklahoma City Energy supporters club left my throat raspy and then some.

But no matter!  Today we revisit the issue of NASL’s lawsuit against USSF and the USL.  A few Interviews ago, Noob spoke with Rocco Commisso, NY Cosmos owner, about all the shenanigans.  Access it from the Interviews link at right or bottom (depending on the device you’re on) to educate yo-self.

Judge Margo K. Brodie:  Please, we’re not in session here!   You can call me Margo.

Noob:  How about Kitsy?

Noob:  But that’s what the K stands for.

Judge Brodie:  You seem an affable fellow.  Don’t push your luck with me though.

Noob:  Margo, I’m holding you in contempt of interview.

Judge Brodie:   That’s not a thing.

Noob:   I took the LSAT a long time ago.  Don’t think I don’t know my way around an interview.

Noob:  Then our stage is perfectly set!

Judge Brodie:   Please state your name for the record.

Noob:  You want to cut to the heart of what needs discussing.   It’s enchanting.

Judge Brodie:  And the lawsuit was anything but.  It was rubbish.

Noob:  Easy on the jargon there.

Judge Brodie:  I thought you took the LSAT?

Noob:  Well-played, Margo.  Sum up the rubbish, if you would.

Judge Brodie:   NASL had their sanctioning as a Division Two league by USSF stripped.  They didn’t meet certain criteria USSF put forth to maintain that level of sanctioning. They’re upset.

Judge Brodie:  It may well turn out that way.   Either way, NASL’s counsel failed to prove there was a conspiracy by USSF board members to vote in a collectively- schemed way in order to hurt NASL.  They failed to prove restraint of trade as well.

Noob:  USSF counsel argued that USL made just as much or more money when they were classified as D-III, a level at which NASL could seemingly be sanctioned.

Noob:  And unreasonable restraint of trade?

Judge Brodie:  It’s like you said in the Commisso interview.  USSF can’t keep people from playing soccer, charging money for tickets.   The “Division II” status thing is just shininess.   It sounds cooler than Division III is all.

Noob:  I understand six teams were set to join the NASL next year, and that they argue now those teams may not come, per agreements made concerning D II status.

Judge Brodie:  Yep.   And that’s a them-problem, not a me- or anyone else-problem.  There’s just no legal reason NASL is entitled to relief.  Go play soccer.  Or don’t.  I kicked a ball around my backyard in short shorts the other day, charged the neighbor perv kids $5 each to stare at my legs.  USSF didn’t restrain me.  They couldn’t.

Noob:  Did they try?

Judge Brodie:  Have you seen my legs?

Noob:  No, Noob has not.  But point taken.   Maybe USSF would’ve granted you Division ‘Meow’ status.

Noob:  Don’t fall for Noob’s smooth ways just yet, Judge.   There’s another issue we have to discuss.

Noob:  You’re from Antigua.  And you’re a soccer fan.

Judge Brodie:  Neither of those facts qualify as conflict of interest or problem in ruling on the NASL case.

Judge Brodie:  I was born in St. John’s.

Noob:  Most of the teams playing in the Antigua and Barbuda Premier League are from St. John’s, true?

Noob:  So you could’ve picked any number of teams of which to be a fan.

Noob:  And you chose Parham??  Your Honor, I present evidentiary exhibit A: 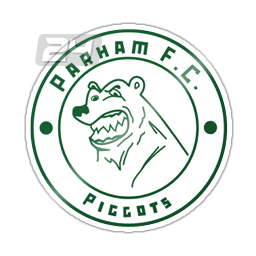 Noob:  That…bear? Looks like it was drawn by a child, and likely not one who was., shall we say, enrolled in college-track classes at school.

Noob:   It’s the worst crest Noob has ever seen!   The bear manages to be terrifying and yet artistically worthless at the same time.   No mother would even tape that on a refrigerator.

Judge Brodie:  I’m sorry you don’t like it.  I’m not sure what the point is exactly.  Am I on interview-trial for being a Parham F.C. fan?

Noob:  You don’t get to ask questions.  Your attorney can ask you anything she wants.  But you will restrict yourself, please, to only answering my direct questions.

Noob:  The plaintiff rests, your Honor.

Judge Brodie:  Am I the judge?   This is dizzying.

Noob:   You’re a wonderful interview subject is what you are, Margo.  Thanks so much for joining Noob.

Judge Brodie:  At least this got me out of playing pickleball with the other judges today…

And there you have it!  That was lush and aromatic.  Thank you for joining us, Judge Margo K. Brodie.  And thank YOU, Noobites, for taking part in another exciting edition of D-Two-Interviews!