Noob hates typing these words, but Fleetwood Town has already qualified to advance.  This is the last game for this Group.  Carlisle needs to win, it appears, as they are down a point and the tiebreaker to Leicester City’s youth squad.

Carlisle Utd has a tradition dating back to the 1970’s of the mascot carrying a stuffed foxed named Olga onto the pitch before games.  Noob’s emotions are really going back and forth on this one.  But if that’s what needs to happen to take down accursed Fleetwood Town, then so be it!  (If you’re brand new, refer to yesterday’s T2T.  The rant exhausted Noob.)   RESULT:   Fleetwood   1-2 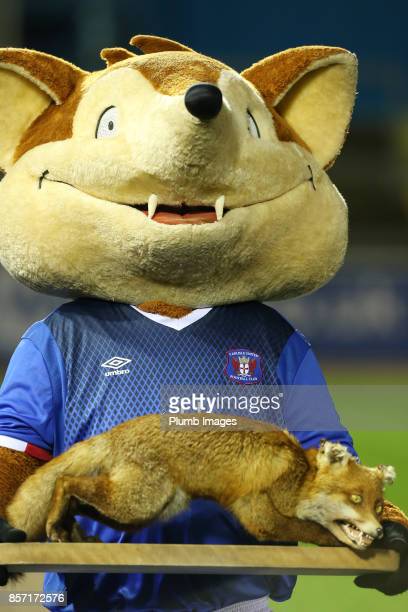 Noob honestly thought it was going to be a stuffed TOY fox.   That thing’s heinous!

If either can get a win here, that team will pass 2nd place Blackburn Rovers and move on to the next round.  Rovers appear to own the tiebreaker of 3rd place Bury, so a draw today isn’t enough.

Bury is a town of 75,000 or so, in the north-central part of Greater Manchester.  They play in League One and are known as The Shakers.  The origin of the nickname dates all the way back to 1892 when the head coach referred to them as such in a pre-game speech.   RESULT:   Bury   3-1 These two are tied for 2nd and 3rd in the Group.  This, too, is the last Group game.  Winner advances.  Bristol seems to have the tiebreaker on Swindon, so even a tie is enough for these Rovers.

One of Bristol’s nicknames is “The Gas”, because of a gasworks near where they used to play.  It was an intracity rival that demeaningly gave them the name, but the club embraced it.   RESULT:   Swindon   2-4

This is the last quarterfinal of the Apertura Copa, with two so-so top-league teams facing off.  The winner gets Ascenso side Atlante, which advanced last round yet again on penalty kicks.  Tijuana seems to play a more open, aggressive game on the road , so this one should be entertaining.   RESULT:   Pachuca   4-0

Noob doesn’t get it, but pleeease be the halftime show.

It’s the second leg of the final!  Junior got the draw on the road in the first game, 1-1.  These two just about couldn’t be more evenly matched.  They’re 3rd and 1st place respectively in their league.   Hail to the victors!!   Athletico Junior is your 2017 Copa champion, 3-1 on aggregate.   RESULT   A.Junior   2-0

This is the Final as well!  First leg being played here though.  Zamora’s in 2nd in league, while MdG is struggling in 8th.

Zamora is actually based in a town called Barinas.   The club are known as “Las Llaneras” – The Plainsmen.   RESULT:   1-1

These two are tied for 2nd, trailing CD Motagua by two points.  Olimpia has given away -1- goal at home all season.  The next-best defensive teams have given up six.  Marathon doesn’t score a ton, looks to be in trouble here.   PPD

Iceland are still reveling in their success at UEFA World Cup qualification, winning their group!   The Czechs finished 3rd in theirs.   RESULT:   Czech Rep.   1-2

And doing their reveling inside a GLACIER

OK, Trinidad and Tobagos’s national team helped keep the U.S. out of the World Cup at CONCACAF qualification.  Noob has already swallowed the bitter pill, feels just fine about going to this less-heralded league for Tracking on a somewhat light Wednesday.

These two are in 1st and 3rd place respectively.  North East Stars are based in the borough of Arima.  The club is nicknamed the “Sangria Grande Boys”, named after the town in which they play.   Now slated for 11/25