1. The Mexican match initially scouted for this date has been postponed, certainly due to the massive earthquake. My continued thoughts and prayers to and for all affected.

South America’s version of UEFA Champions League rages on! This is the second leg (game) of this two-legged tie (pairing of games between same two teams). Wilstermann leads on aggregate 3-0, meaning they won the first leg 3-0 at their place.    Now that’s how you make a comeback.  RESULT:  River Plate  8-0

San Lorenzo won the first leg 2-0. Will either home team in these quarters be able to overcome their deficit and advance to the semis?   Lanus then advanced to the semis on PK.    RESULT:   Lanus  2-0

Since it’s been a while, a reminder on what this tournament -is-. This is not a Champions League. This tournament features qualifying Latin American and Caribbean club teams. The winner gets a slot -in- the next CONCACAF CL.

SdG held Arabe to a 0-0 draw in the first match of this semifinal tie. Now they get the Panamanians at home at should finish them off.   They get Honduran side Olimpia in the Finals.    RESULT:   SdG  1-0 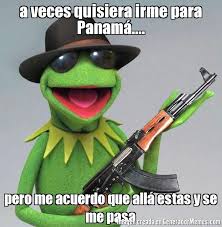 …unless Panamanian Kermit shows up.

Also referred to as the Scottish Communities League Cup, it is the second-most prestigious Cup in Scotland. It is contested between all the teams of the top four leagues of the pyramid system there.

Aberdeen was runner up in the Scottish Premiereship last season and is the stronger side. But Motherwell had the literal luck of the draw for determining home field advantage, will play host in Scotland’s “Steel City” for this quarterfinal.    On to the semis.    RESULT:  Motherwell 3-0

Copa del Rey is Spain’s FA Cup. This event is just in the third round, but since we Tracked Cultural Leonesa. Noob thought it would be fun to see how far they go. The bad news: Valladolid finished middle of the pack in Segunda B last year, where as Cultural Leonesa just got promoted to that league for this season. The good news: Our boys won the draw for home field advantage for this one-off.    Tuxedo boys are out.    RESULT:  Valladolid  0-4

Here’s to hoping they break these bad boys back out.

Let confusion reign! Noob failed to realize initially that River Plate was slated for two different matches today. This game will probably be moved to a different date, but I’m listing it in case it’s their Cope Libertadores match that gets moved. This is a Round of 16 one-off, and RP is the event’s defending champion.    RESULT:  ppd

This Round of 16 match simply must be the farthest RZ has ever been. Prior to this season, the highest they have ever finished in their league is 6th place. And they play in a regionalized third tier league. Meanwhile Warszawa is the defending Ekstraklasa champ, and will score here like a pinball game.    Ruch Zdzkndfbnqeg , we hardly new ye.   RESULT:    Warsaw  0-4

Noob has also list games from this league as “First Division”. I just can’t tell which is definitively the real name. #1 hosts #4 here. Not a bad position for CN to be in, given that the club was financially insolvent just three seasons ago. They were nearly dropped to second division that year by their national governing body, despite finishing in 3rd place. CN won a court case on it, though.    RESULT:  1-1

What, they don’t deserve a break today?

#4 hosts a very mighty #1 club here. Fun fact: The hosts’ name means “union” in Arabic. There are many clubs that carry this word in their name around the Arabian world.    RESULT:  1-1