What is Noob?  Well, I’m Noob, and the site is Noob.    Here, delight in the ten most important matches to follow for us – the newish American fans of the global game!

But be prepared.  My perspective is a little like the Sunday funnies — if the funnies were all just Farside comic strips.

Just three matches to go in the regular season for these two clubs, 6th and 4th place in the Western Conference.  Top six make the postseason, so things are getting hairy.

It pleases Noob to no end that RSL hasn’t won in their last three matches.   From our Constitution:

Article 1, Section 9: “No Title of Nobility shall be granted by the United States”

The “Royal” RSL are as un-Amuricuhn as a club can be!   Noob’s almost torn between wanting them to just lose every match, or sneak into the playoffs than get blown out.

I’ve thought it over.  Just lose every match.  People would rather see Zlatan and the L.A. Galaxy (just two points back in the standings) anyway.

Portland are treading water in 4th place, 1-1-1 in their last three against a solid slate of competition.

A couple weeks or so back, Noob wrote that there were such big gaps between Columbus and both the 3rd and 5th-place clubs that they should just be penned in for the four-seed in the Playoffs.

Apparently, I’m still building my sense of how quickly teams can move up and down.  The Crew are still #4 and been playing ok, but Philly is now within a point of them.  And it’s not like the Union have been on a Seattle Sounders-like winning streak (they won something like nine straight recently).

More, NYCFC have struggled so much of late, Columbus could even catch them for #3.

Montreal, meanwhile, are going to be the six-seed or bust.  “Bust” would mean Wayne Rooney and D.C. United (two points out) completed their sensational comeback and caught them.  It will be interesting to see how the Impact look tonight, given that their Evan Bush-led defense just gave up a five-spot to D.C. while getting skunked.

RESULT:   Montreal   3-0         The Impact looked juhhhst fine!    This doesn’t secure them that six seed mathematically, but they’re on the brink now.

They’re over halfway through the Apertura (first half-season) in Mexico.

Santos just slipped ahead of Cruz Azul for 1st yesterday, courtesy of a win over last-place Atlas.  But this is a good matchup for the home team today.  Cruz Azul succeed on defense, the league’s best.  Monterrey, though in 4th, have struggled on offense compared to the other title contenders.

It’s not Noob-bias – my beloved Fightin’ Cherries are in the best-looking English match of the day!

AFCB recently suffered a harrowing defeat to then last-place Burnley, 0-4 on the road.   They’ve rebounded nicely with wins in the EFL Cup over D2 Blackburn and in-league over Crystal Palace.   Neither was a dominant performance.  The defense isn’t looking fantastic.   But at least things didn’t completely unravel.

They’re tied for 6th with Watford, who started the league season on fire.  But they’ve not won a match since beating Noob dreaded Tottenham  Sir Topham Hatt Hotspur two weeks back.   Watford, if you never win a match outside of beating those traitorously-named yahoos (Harry Percy – boooooo!), you’ve still done the Lord’s work.

But your crest still looks like a vaginoplasty waiting to happen.

PSG are running away with the league title already, even with the season just eight-nine matches in.  But with AS Monaco more than struggling, the other league invite to the Champions League group stage is wide open!  (France gets a third club in, too, but that one has to get through the qualification stage there.)

That brings us to Lille.  They’re #B, looking good on both sides of the ball.  If not for PSG, they’d have the league’s best offense among current table-toppers.

St. Etienne are tied for 3rd, but they’re weaker on the both sides of the ball than the teams around them in the standings.  They’re a midtable club-in-waiting.

Sao Paulo started this season on a surprising run, but have fallen back to earth a little of late.  They led the league for some time, now sit in a tie for 3rd.  Three straight draws have kept them afloat, but these were against teams that a club serious about the title should’ve been winning.

Palmeiras are a more traditional power, at least recently. They’re back in 1st, haven’t lost since 9/12.  They’ve won four straight over Sao Paulo.

Sao Paulo’s nickaname is “The Battle Monkeys”, so maybe they can get serious once again!

Welcome back to the third-best league in CONCACAF!   Save your hate mail, Costa Rica, Noob knows you think you’re better than MLS.  Can we agree it’s close?  Bueno.

#3 hosts #1 today in a classic battle from this league, two mainstays of power there.  Herediano are six points back of 1st.  They need to make a showing on offense today, get a W, or they’re about to fall nearly out of the trophy-running.

Haiti?   Noob, is this really more important than #2 Kansas City against #7 L.A. Galaxy?

Great question, voice in my head.  But look.  Noob could call all the MLS matches “more important” from the American perspective.  But we’re going to get to know our federation neighbors.

Noob’s never found official rankings for CONCACAF domestic leagues.  But if league strength corelates to GDP (and it usually does), this one is probably not that great.  Come on in to the Track party anyway, Haiti!   There is acceptance with Noob.  And look!  Noob brought out the fine meats and cheeses platter.

Cosmo still doesn’t have much defense, so their stay at the top will probably be short-lived.  If Cavaly can keep up a 2:1 GD ratio somehow, they’ll make the Playoffs. This will at most be a three-club race for the title – these two and Shkendija.  Since Shkendija kicks butt, but is just in 3rd now because of some draws, this is a hypercritical match.   V.S. have yet to lose, but don’t look better really than Pandev.  And Shkendija won’t lose at home today to a midtable team.

It’s the FA Cup Final in Singapore —  and being contested by a Japanese reserve team and one from Brunei.  Anarchy, woohoo!

Both teams play in Singapore’s top flite, the S.League.  Niigata are the reserve team of a now-D2 club in Japan.  They have yet to lose on the league season.  Brunei’s entrant is midtable and should be considered a two-goal underdog.

The match may not end up being competitive, but Noob is always down for two soccer-y things:  #1-#B league matchups and for Cup finals. 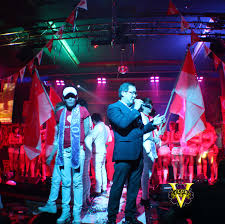