4th and 3rd in the Western Division. Too much season left to call it a battle for home field advantage, but this should still be a doozy.

Vancouver is in 6th in the West, just above the Playoff line, and really is better than the teams just below them. Their hold remains tenuous just the same. Orlando City is 8th in the Eastern Division and has the second-worst goal differential there. Swamp-built cities must go down and stay down. Neither has lost this Clausura (half season), but Cruz Azul has also only won twice. Monterrey looks dominant.

Based on last season’s standings, no supersweet league matchups here. So by default, I give yo my Cherries – go, Bournemouth!

Orlando has nearly wrapped up a Playoff spot, sitting in 4th and I think this is their last regular season game. Tiebreakers aside, even a draw at soft KC should be enough.

#2 hosts #1 in the match of the season! There are no league playoffs in J1. Also, I only recently learned Cerezo was only promoted to J1 this season. I wonder if there’s a lot of parity over there, or if there is new ownership spending money or some such.

Sofapaka is mainly an abbreviation for “we as a family achieve together”. Kinda cool! But no adoption by the Noob until they change their mascot to “the Alpacas”. Nacional might win if not for you Medellin kids! * fist shaking *

Oh, you think you’re the only people who give Noob that stare?  Puh-lease.

Despite only being in 4th, they have the best goal differential in the entire league.  The Kansas City reserve squad need to start hot on the road.

I don’t know if it’s a chain or not, and if so how widespread, but The Management has informed me of an outfit in SF called Proposition Chicken. Noob and The Management love our sammiches. Go, Deltas, and stuff. 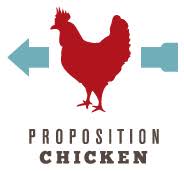